From Chapel to Military base to Country Hotel, Grassfield Hall has had many lives!

In 1928 Father Hammond moved into Grassfield House. Previous, he used to pass through the town on his push bike as he cycled to Scar every Sunday after taking the train from Harrogate to say Mass for the Dale’s people. While his church, The Lady Immaculate was being built, he needed a base in the area, so he moved in and converted a room as a place to worship in Grassfield House, and he lived in a room upstairs. The new church was completed in 1934.

From 1939 until 1945 during the war, the Grassfield estate was used by the Military. The 69th Field Artillery was based at Grassfield  to protect the reservoir and used the house for document storage.

In 1971 after being split into apartments, Fred and Gladys Bailey lived in the house with Gladys’s  sister and husband, and it is here that you can see them at the front door as they celebrated their Golden wedding anniversary.

Grassfield House was turned into a business in 1975 when it was bought by the Machellan family, who ran it successfully as a Bed and Breakfast. Then after ill health, they sold the house and business to the Garforth family in 1988, who changed its use to a hotel Country House Hotel. It was the hub of the local community for many years. However, after a run of bad luck it finally closed its doors in 2001.

The house after being unoccupied for a while then being a little run down, passed to two different owners with plans to renovate it. However, the plans were never to succeed, and the house was repossessed by the bank in 2009. Year after year the house fell into further disrepair.

After standing empty for nine years the Hall had suffered with wet and dry rot, it needed part of the roof replacing and needed to be underpinned. All the original features had now been stripped out by looters, staircases gone and some of the upstairs floorboards were no longer in place. Most of the windows and doors were missing and boarded up. Squatters had taken up residence, and the house was now just an empty shell. The once landscaped gardens had become completely overgrown and the Hall could no longer be seen from the roadside. The derelict building no longer stood proud as it once had. That is where our story begins! 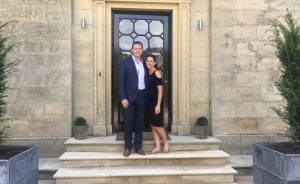