Grassfield house as it was known in 1810, was built by entrepreneur Teasdale Hanley Hutchinson, who, while the house was being constructed, lived across the river at Harefield Hall. The Hutchinson family leased and managed local lead mines in the area, and previously  had been involved with lead mining in Alston, where one of their mines was said to be called ‘’The Grassfield Mine’. Teesdale started construction of the house in 1801 and built it to stand proud on the edge of Pateley Bridge with spectacular scenery surrounding it.

Teasdale lived in the house with his wife Elizabeth, and their first son Hanley was born at Grassfield House in 1811. Teesdale and Elizabeth lived in the house until they passed away. Elizabeth died in 1837 at the age of 61, and Teasdale lived until the age of 77.  After this in 1845 the house  passed to their firstborn son Hanley. The 1851 census tells us that living at the house at this time was lead merchant Hanley Hutchinson, his wife Charlotte, their two sons Teasdale aged two and Charles age 2 months,  plus four servants

In 1883 after his wife had passed away, Hanley moved out of the house to Whitfield Lodge in Ripon, as he said the house was too big and lonely for him! He spent the remaining few years of his life in Ripon. It is at this time that the Grassfield Estate was sold to John Yorke of the Bewerley Estate.

In 1888 John Hawkridge Metcalfe and his wife Adeline move in as tenants.

1895 the first Pateley Bridge Agricultural Show was held on the Grassfield Estate. After this first year it was moved to its current location on what was the Bewerley Estate, now the Pateley Bridge Show ground. 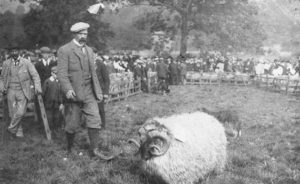